Forbes released their annual list of the most valuable MLB teams and the Yankees came in at number one. 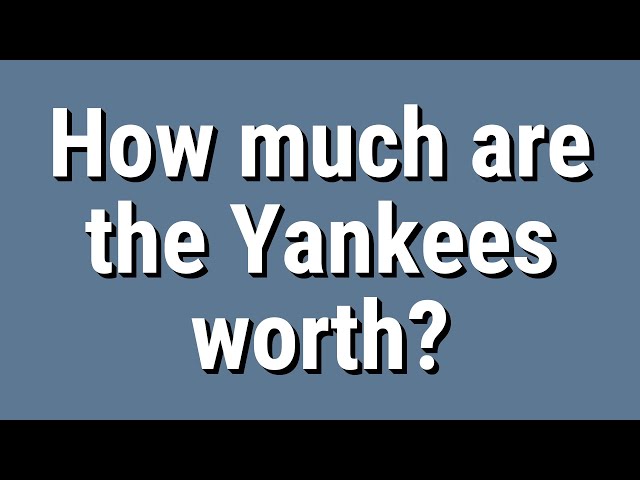 The Yankees’ Value by the Numbers

The Yankees are baseball’s most valuable team for the 20th consecutive year, according to Forbes’ annual valuation of Major League Baseball franchises released Wednesday.

The Yankees are worth an estimated $4.6 billion, up 9% from last year and more than double the value of the next most valuable team, the Los Angeles Dodgers ($2.15 billion).

The Yankees’ value is due in large part to their revenue, which is an MLB-record $627 million. The Yankees generate more revenue from broadcasting rights (an estimated $340 million) and attendance (an MLB-high 3.7 million fans) than any other team.

The Dodgers are second in value for the third consecutive year, followed by the Boston Red Sox ($1.95 billion), Chicago Cubs ($1.8 billion) and San Francisco Giants ($3 billion).

Operating income is a measure of a company’s profitability. It is equal to a company’s revenue minus its operating expenses. The Yankees had an operating income of $67 million in 2017. This means that the Yankees generated $67 million in revenue after deductions for operating expenses such as player salaries, stadium maintenance, and team travel. Operating income is a good indicator of how efficiently a company is run and how well it is managed. The Yankees have been extremely profitable over the years, due in part to their large revenues and efficient management.

The Steinbrenner family paid $8.7 million for the Yankees in 1973. The team is now worth an estimated $4 billion, according to Forbes. That’s a return on investment of more than 46,000%.

The Yankees have been the most successful team in baseball over the last 20 years, winning five World Series titles and nine American League pennants. The team’s value has risen steadily during that time, despite the recession of 2008-09.

The Yankees are the most valuable franchise in baseball and are worth more than twice as much as the second-most valuable team, the Los Angeles Dodgers. The Yankees’ value has been helped by their new stadium, which opened in 2009 and generated $500 million in additional revenue for the team.